Atomic Arts is a theater company in Portland, OR which has, for the past three years put on episodes of Star Trek in Woodlawn Park. In fact, they inspired the company

lettered and I formed in Seattle. Yesterday we attended their opening show and it's obvious the word's gotten out. (Also, they must be dynamite at publicity.)

Here are some photos. The vantage point is not very good, as you can see, because we got there only two hours ahead of time. Yes, you read that right. The crowd shots I took are from 3pm. There were hundreds of people behind the stage. But! If you're in the area, and have a free afternoon, I highly recommend it! 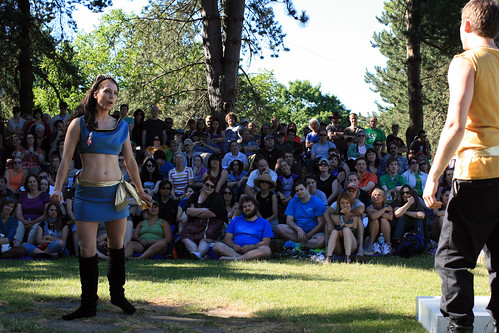